We can all agree that the Land Rover vehicles, especially the Defender are extremely tough and strong vehicles. 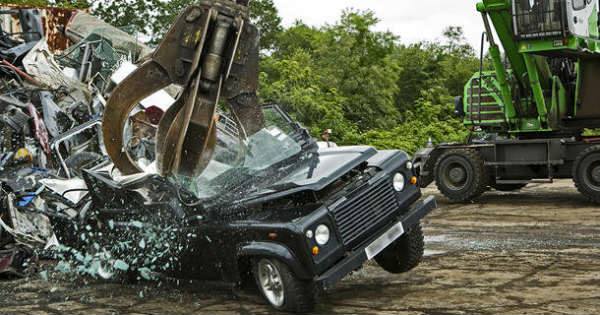 However, even this mighty vehicles can`t survive the monstrous crusher of the Border Protection and U.S Customs. The example shown being destroyed in the video below was confiscated at a porn in Baltimore back in April because of its illegal import. Unfortunately, you can`t buy a newer model of the Defender in the Unites States because it failed emissions regulations and safety rules. However, older models that are at least twenty five years old can be bought legally because they meet all U.S car rules. However, many 4×4 enthusiasts will find this video extremely graphic so we warn you if you are sensitive do not watch it.

You can witness the shrieking sound of shattering glass and twisted metal as the gigantic wrecking claw is constantly destroying the car without any mercy whatsoever. The car is being reduced from $100K to just 30 dollars in mere seconds.

The Land Defender is extremely popular in the U.S and many people are buying them and modifying them to look like an older 25 year old model. Because of this fascinating demand of the Land Rover in the U.S we think that Land Rover should hurry up with making these vehicles legal in the U.S. If not, people will always find various ways on how to get Land Rover vehicles from the black market. Yeah folks, that`s how much the iconic brand is desired in the U.S.

Finally, check out this situation where the police seized one rare and exotic collection of 46 cars.