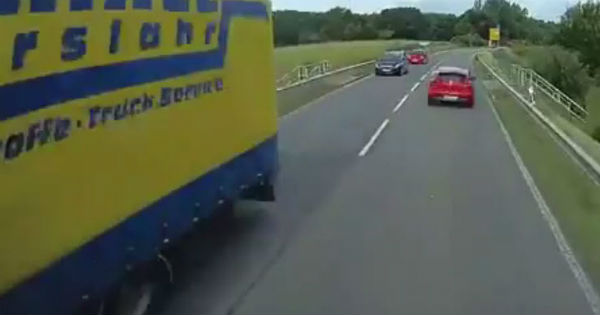 This can happen because of poor visibility while following a truck that you want to overtake. That`s why a person should never try to overtake another truck if the visibility is ahead is poor. In this situation, drivers of passenger cars are more often to blame for such accidents with trucks and other big rigs. In this video that`s most definitely the case. You can see a dash cam footage on a truck that`s just rolling on the highway when all of a sudden a Renault overtakes him. However, this is where the terrifying moment happens and you can see an approaching truck on the other lane.

You can see the Renault barely missing the approaching trailer truck in what would`ve been a major disaster where multiple lives could`ve been inflicted by it. The Renault misses the approaching truck by just milliseconds. This is a great example as to why you should not overtake a truck where you are not sure about what`s approaching ahead in the other lane. This was a bad overtake and a stupid move from this driver and we can safely say that this is the most fortunate driver ever. He/she must have got some help from the heavens because this sure is an unreal safe. We hope this driver has learned his/hers lesson because we doubt he/she will get a second chance in a scenario like this. Check it out in the video below.

Obviously, some people need everything simply explained! Here is how to avoid accidents!