When you`re driving as fast as your car can go, you want all of your parts right there, but this flying piston had a completely different idea. 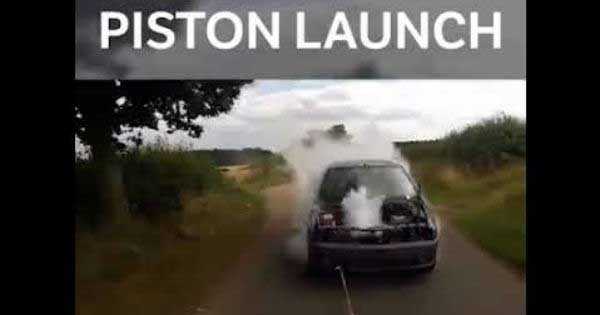 Someone probably forgot to take a look at it before the pulling which caused it to pretty much come off and fly straight upwards like a missile. Legend has it, it`s still up there with the other pistons that just decided to take off. Anyway, the guy in the car was driving without a hood on, for some reason, and his car was already smoking pretty heavy. As soon as he tries to stabilize his vehicle`s speed at a pretty high number, the piston decides it has had enough of this and is no longer a part of the pulling!

Having a flying piston fly straight up and out from your car should always be a concern for the mechanical safety of your vehicle, but this guy didn`t have much of a choice when his piston flew off. His car automatically dropped in speed and pretty much quit the towingTowin at that point. I wonder what caused the piston to fly off into space like that. Well, whatever it was, I`m sure this driver is going to pay a lot more attention to what`s under his hood from now on! Either way, this is a video that`s well worth watching and remembering – you don`t see a flying piston every day! Make sure to not try this at home as it can be bad for your general health and dangerous to your life.