Modifications come just in any size and shape, some people love to touch up their cars` exterior whereas some love to modify what is under the hood, and such was the case with this powerful VW Golf. 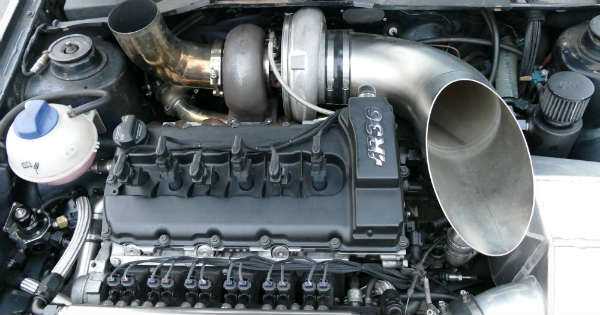 This car has been around for decades and its production has not stopped to this day. People seem to enjoy it very much but this man took a step forward. He created something completely insane. Though at first glance you could not tell whether something was modified on the car hence the cars` exterior look completely normal, you would be amazed once you see what is under the hood. This 4WD beast produced 1300bhp on the dyno and reached max speed 169 MPH on the drag track.

The powerful VW Golf owner decided to take his monster out on the track and compete against other drivers. The event held place at Santa Pod Raceway back in 2016. His Golf was set on the drag track against the VW Beetle. The start was not promising for the Golf hence it delayed to start right away and it seemed as the Beetle had a decent advantage. That is where the fun began.

The powerful VW Golf accelerated and almost instantly leaving behind the Beetle and finishing the race in just 9.13 seconds reaching max speed of 167 MPH. He took part yet in another race with the same Beetle and this time managed to improve its time to just 8.8 seconds. What do you think, is this the most powerful VW Golf so far?

At last, here are the best VW cars to buy right now!