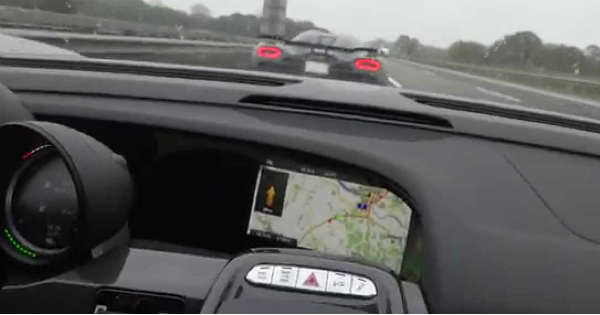 We are truly in the midst of a very special era for hypercars! Glorious models like the Ferrari LaFerrari, McLaren P1 and the Porsche 918 Spyder are stealing the spotlight! However, there are also smaller supercar manufacturers like Pagani and Koenigsegg who are designing machines with HP figures that are on the very boundaries of insanity!

Where else if not the Germany`s Autobahn to the test this monstrous machines?! The perfect place to test out these beasts to the limit without ending up behind bars! On this highway, we have a video recorded from a Porsche 918`s onboard cam racing a Koenigsegg Agera R Model Car!

The most staggering thing about this footage is that the Porsche 918 top speed is officially 214 mph! However, this here Porsche managed to reach 218 mph on the Autobahn!

So, we can only assume that the wind was hugely in its favor or maybe the road was slightly downhill! On the other hand, we don`t know how fast the Koenigsegg Agera R Model Car was going!

But given the fact that it is fitted with a 5.0L twin turbocharged V8 and a top speed of 273 mph, the number sure is overwhelming! If it had an empty tarmac, the Agera R would just keep on going!