After coming home from a long day`s work, you`re really not in the mood to be exerting any parking justice, are you? Well, this guy had to, because as he was driving up to his own driveway, he saw that someone had parked their car right in front of the entrance, effectively blocking his path to the driveway. So, like any normal person, the guy gets out of his truck, goes and checks the incorrectly parked vehicle for any unlocked doors, to see if he can maybe move it out of the way with regularly harmless methods. However, the vehicle is completely locked down and he has no way into it. 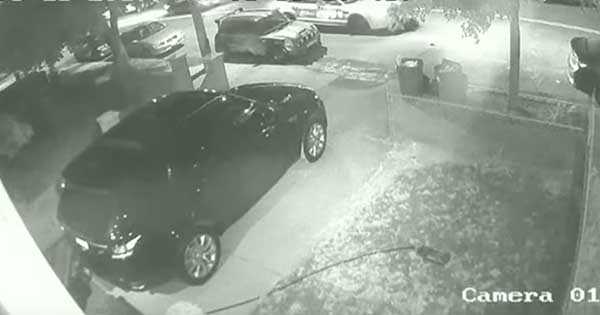 So, of course he does the next most valid thing that anyone would do – he straps his car to the irregularly parked car and starts pulling!

The guy pulls the car with some chains attached to the back of it, and going to his truck. After one good pull, parking justice has been satisfied! The wrongly parked car lies perpendicular to its previous position and the space to the driveway has been opened up, so the guy can freely park in his own home. Good thing he had those chains because it`s a whole complicated procedure when it comes to removing a wrongly parked car. You have to call the police, then they have to get a tow truck and move the vehicle away, but this way the guy went around all of that and just moved the car by himself. Maybe he knew that it was a neighbor`s car, or his children`s, maybe?

Finally, find out what you can actually DO if someone blocks your driveway, legally-wise!