This crash test is done on the road and the car gets totally wrecked at the end… Most of us have probably seen those inside crash tests where car manufacturers put to the test the latest safety technology. The tests vary according to the speed, angle of impact as well as the passengers inside. Many parameters are measured during the tests and are being compared at the end. Much important information is gained. But what you are about to see in the following is not your regular crash test. It takes place outside in the woods and the cars used are not your new vehicles which should be launched for sale. 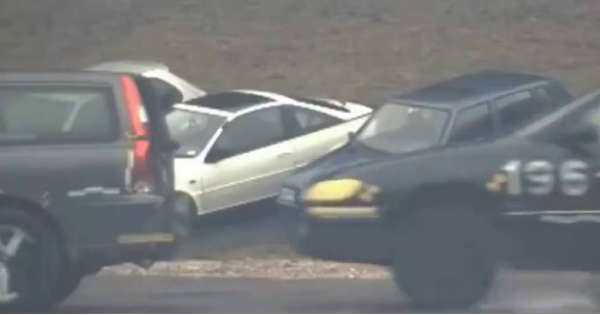 Only old cars are tested here hence they know that eventually they will end up at the junkyard. The concept of the test here is fairly simple. They are placed at a steep ramp which speeds the cars up and a barrier with another car is waiting at the end. By the time the car is down it has already reached speed of over 200km/h. Behind the car waiting at the end is a barrier made from cement to stop the blow. The same moment the crash happens pieces of metal and plastic are flying all over the field.

There are several people from the side monitoring the whole crash test. And they go through the same test over and over again. The cars get completely wrecked but it is still fun to look at. It seems as if there are no dummies inside and the whole crash test is used only for the cars themselves. Check the video for more crashes!

Before you go, check out the world’s fastest crash test!