You had think that a resigned F1 World Champion like Nico Rosberg would drove any kind of AMG car imaginable let alone the new AMG GT R. Especially when you take in mind that he won his world title with Mercedes-AMG. Well, it looks like that is not the case. Rosberg is also usually seen using a GLC as his daily driver. He is also seen enjoying the electric Renault Twizy at home in Monaco. Not quite what you would`ve imagined to be driven by an established F1 racer. When it comes to a supercar comparison, this GT R tops both the Porsche 911 and the Nissan GT-R. 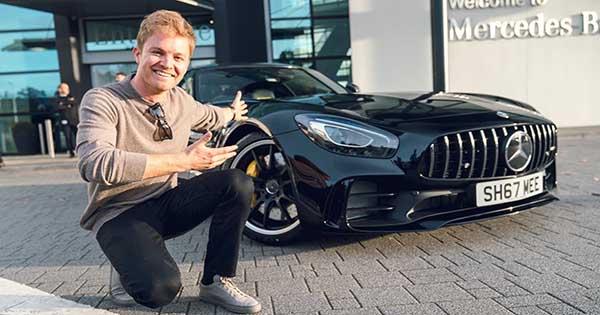 It combines lust, passion and excitement. Now, it`s about time a former F1 world champion who won the title with the same German manufacturer try this godly supercar. Nico Rosberg decided to visit the Mercedes World that occurred in England. Here, a certain YouTuber that goes by the name of Shmee150 didn`t fail to grab the opportunity and meet the German racing driver in person. Shmee150 went there to collect his own new AMG GT R.

To make things better, it turned out that Nico Rosberg was also there to collect his own Mercedes-AMG GT R. Nico Rosberg accepted to do a video with Shmee150. You can see Nico trying out the flawless supercar for the very first time and he also gives his opinions. By the way, Nico Rosberg is also a pretty popular YouTuber himself. His channel is active for six years now. However, his views are significantly rising now when he started delivering stronger content.

Finally, check out Louis Hamilton and Ken Block having fun on the strip!