In this video, you`ll see the BMW M5 drag racing two other very competent German machines -- the Mercedes-AMG E63 S and the brand new Audi RS5. The ¼ mile is definitely standard by which all new cars are measured. It`s that and the 62 mph sprint. Both of these tests are included when comparing these very competent German machines. The Audi RS5 is definitely the underdog here because it comes from a class which is below the other. However, Paul Wallace and Mat Watson from the YouTube channel Carwow aim to prove that it is a very good drag racing bargain. 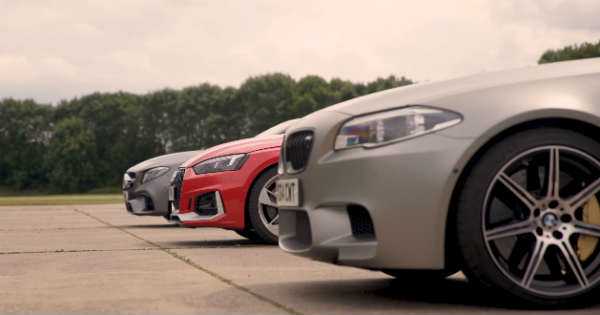 The Audi has a 450HP V6 engine while the BMW M5 has 600HP. However, even though the BMW packs more power, the Audi manages to pull ahead noticeably. However, this was pretty much expected considering the specs that include an AWD. Audi RS5`s AWD managed to hit 62mph around four tenths of a second quicker. The brand new M5 will be available for customers in just a few months. It will also feature an M xDrive. The BMW M5 drag race with the Mercedes-Benz E63 S was pretty close.

However, for now, this Bavarian vehicle is best enjoyed driving sideways and definitely not in a drag race or a straight line. However, things were a bit different when it came to the rolling race. The traction advantage which the Audi had was canceled out and this left the 600HP BMW M5 to battle the 612HP E63 S. Watch the video below and enjoy!