Lewis Hamilton is a three-time F1 World Champion and he`s on a very good path to clinch his fourth title this year. Sebastian Vettel was leading the championship this year before the Singapore GP where he was involved in a nasty racing incident with teammate Kimi Raikkonen and young racing star – Max Verstappen. After this racing incident, everything went downhill for Vettel as he was struck with Power Unit reliability issues in three consecutive races. Having said this, Lewis Hamilton might clinch his fourth world title as soon as the next race at the United States GP in Austin, Texas that`s due to be on 22, October. 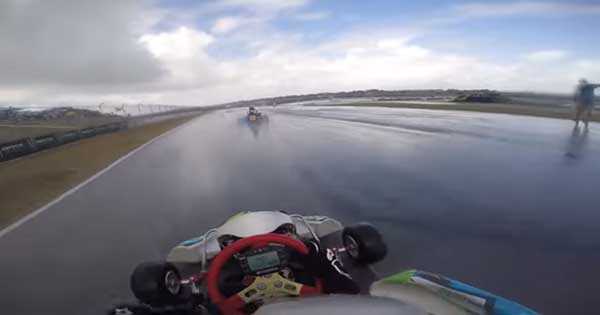 Lewis Hamilton started conquering the racing world ever since his debut back in 2007. In his debut year, he managed to put up a great fight to his experienced teammate and two-time world champion – Fernando Alonso. So, this is why, Lewis Hamilton has been an immense inspiration to many young racers. This young go-kart racer had the time of his life when the three-time F1 World Champion decided to surprise the go-kart racers at the Barbados Festival of Speed that happened last year.

When this go-kart racer noticed Lewis Hamilton he went completely starstruck. To make thing more interesting, out of a sudden it started raining so all of the racers didn`t have time to change tire so they all raced on slicks. Even though this is not a serious race, it`s still pretty challenging with the treacherous conditions.