F1 driver Max Verstappen is taking F1 by storm and is undoubtedly one of the future stars having proved that he can race with the likes of multiple world champions like Sebastian Vettel and Lewis Hamilton. 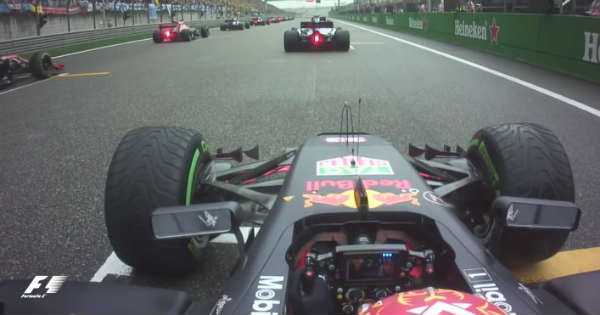 He also has proved that he is one of F1`s great wet masters with a superb performance at the Brazilian GP in the 2016 season. However, he managed to do a similar performance this year as well during wet conditions at the Chinese GP. Qualifications didn`t go well for him as he got struck by software problems and was forced to start from 16th. Nevertheless, everyone knowing what Mad Max can do, were anticipating a great opening lap from him. As you can see in the video below, the young F1 driver Max Verstappen didn`t fail to surprise yet again.

In the video below, right at the start, you can notice the young Dutchman cunningly selecting second gear for a great starting performance. In fact, this was a very bold and a wheelspin-limiting decision which enabled him to quickly rocket away from 16th position.

Once underway, the young F1 driver Max Verstappen quickly got Carlos Sainz`s Toro Rosso that was on slicks and managed to pass Kevin Magnussen, Marcus Ericsson and Vandoorne`s McLaren in the first two turns.

Afterwards, the next victims were Serio Perez with his Force India and Williams` Lance Stroll. Lance Stroll was passed magnificently under breaking through Turn 6.

While showing an amazing confidence that tackled these tricky conditions, Max used a wider racing line through the eight turn in order to overtake no other than mega racer Fernando Alonso for P9 before overtaking the experienced Felipe Massa on the inside into Turn 11. He snatched seventh place after overtaking the struggling Nico Hulkenberg who had to go into the pits.

Before you go, read the full biography of Max Verstappen!