The United States GP in Indianapolis is known for some controversy when in 2005 all of the cars that were running Michelin tires were disqualified from the race due to unsafe tires. When you take into consideration that most of the grid was actually on Michelin tires, only 6 cars were allowed to start the race. 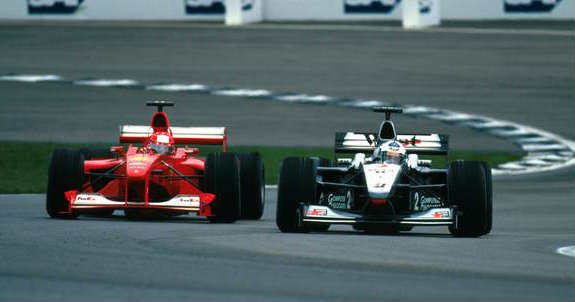 This was a huge debacle and a big smear on F1`s reputation in the U.S. Nevertheless, Indianapolis in F1 is renowned for some awesome races and battles as well. One of them is the mega battle between Lewis Hamilton and Fernando Alonso back in 2007.

However, in this one, we go even further back for this F1 retrospective at the United States GP which happened in 2000. It`s one epic battle between Michael Schumacher and the McLarens of David Coulthard and Mika Hakkinen. Schumacher was passed at the start by Coulthard who had a jump-start. After a couple of laps of squabbling, Michael Schumacher eventually managed to pass Coulthard in a wheel-to-wheel maneuver. Even though Schumacher managed to win the race, he wasn`t very happy. He accused the Scottish driver of blocking and driving deliberately slow so title rival Hakkinen can catch up and overtake him.

Moreover, here`s what the guys from Car n` Driver have to say on which racing tracks are the best!