The world was absolute thrilled then Tesla announced the production of their latest vehicles and in this video we take a look at something special i.e. the Tesla semi acceleration. We were all convinced in the great quality and the robust way this semi was made, but it was finally time to actually see it in action. Luckily, this video about the Tesla Semi Truck acceleration was just published some days ago and it is a true example of the power of the Tesla semi and what it is actually capable off, besides the awesome things we heard about it. 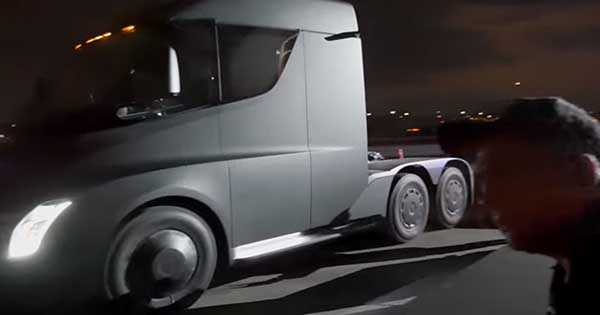 Elon Musk said that this is going to be an absolute game changer in the world of trucks, and we can without a doubt say that is surely is so. There are many people gathered to see this amazing semi in action. Once the robust truck is up and going, you might think that this is actually a racing vehicle, not just some normal electric truck that is going to be used in the near future on daily basis by millions and millions of truck drivers.

If you have not been convinced by the actual abilities of the semi-truck after Elon Musk talked about it, are you now after watching this video? We are most certain that you are hence this semi acceleration is not something you see every day. What do you think, are we going to see something better in the near future, another truck that is going to be more powerful than the Tesla semi-truck?

At last, check out the Tesla Model S racing a Ferrari on a 1/4 mile! What do you think about this Tesla Semi Truck acceleration footage?