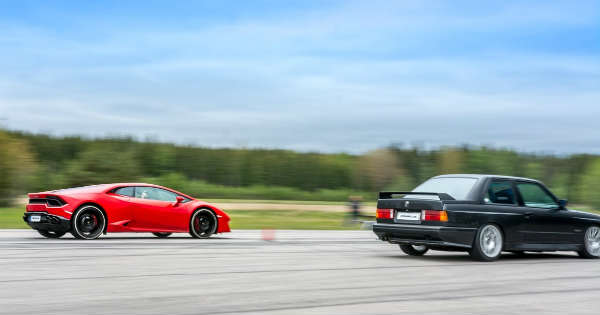 I`ve heard a lot of people trusting more in their modified cars than in normal, production supercars, but it`s impossible to say that the new Huracans don`t have the spirit to be a winning race car, and they have it when they`re rolled out of the factory. You don`t need to do any modifications, they are already pretty perfect and ready for racing the moment you buy them.

Anyway, the BMW and the Lambo duke it out and while the BMW driver is confident he can take it, the guy in the new Huracan had the game in his hands the entire time – he decided when to win and that the BMW would lose. The BMW driver couldn`t close the gap between himself and the Lambo the entire time that the race was taking place, and in the end the result stayed the same – overwhelming victory for the guy in the Lamborghini and a lesson for the driver of the BMW.

At last, check out this snow drifting Huracan by following this link!