When you want to get an old car and mod it out so well that it turns out better than the original, you have to make a good plan – this modified Toyota had no trouble with that aspect of modding. 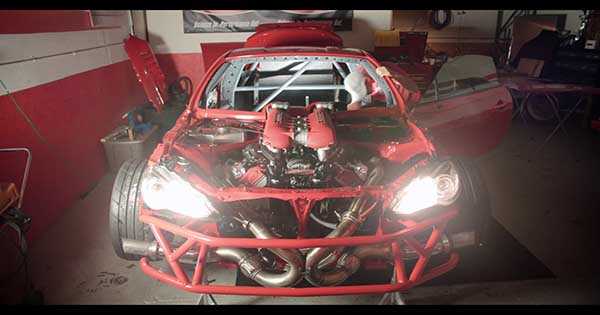 The guys who made it have proved that even some of the best cars in the world can be improved if you slap on some better equipment, but only if you know what to put in, and where to put it. For instance, the people who built this awesome vehicle decided to slap in a Ferrari engine under the hood of a Toyota and see what happens – the result is simply mesmerizing and will make you think twice before ranting about modded cars next time.

This modified Toyota also has a cage built in itself, to prevent injury to the driver and anyone else in the car. However, that is just a little piece of what this beast can do now – as soon as the driver fires up that beast of an engine, it`s all clear to you – that rumble under the non-existent hood is some of the most impressive sounds you`ve heard your entire life. Even more so when the guy steps on the gas pedal and gives it a nice few revs, you can actually feel all the people that have watched this video throw their money at the screen. Driving this car is impressive, building it perfectly is even more impressive, but getting it to this level after hours of tweaking every possible aspect of it – now that`s art.

On the other hand, this Beetle has a Porsche engine in it!