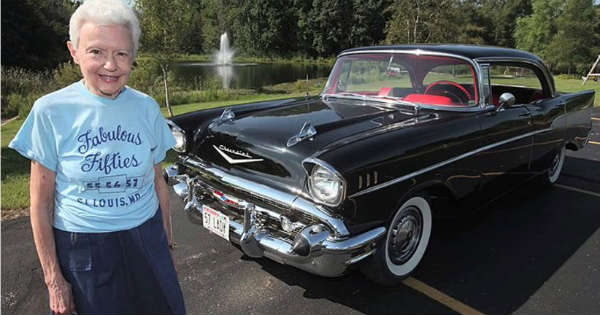 She bought it just before the 1958 models came out. They didn`t show her many cars, the salesman showed her the demonstrator and it was time for him to sell it. Nevertheless, she loved it and she needed a big car at that time anyway.

For that period, the 1957 Chevrolet car was really advanced. It is equipped with power brakes, power steering and a four-barrel carburetor V8 engine. This car also has what was verbally known as turbo jet. However, the correct term is turboglide. This was very efficient because there was no feeling at all of shifting. She chose to keep the car all these years because she had no reason to give it up. She had no major problems with it and everybody liked it. The car has 116,000 miles on its odometer which is in the span of 53 years around 2,000 miles a year.

Curious to know which are the seniors` favorite cars? Follow this link!