This Moab offroad adventure will never be forgotten! A Land Rover dealership based in Salt Lake City decided to organize a two day offroad event in the city of Moab. There was a great attendance by 30 Land Rovers who showed up for some Moab offroad adventure in three different trails that are consisted of various difficulty that enthusiasts can choose from every day. This enthusiast and Land Rover owner in the video below naturally opted for the most technical/difficult trail of them all which goes by the name of Hell`s Revenge! 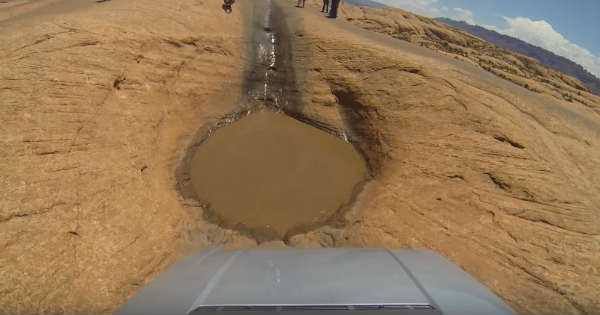 It`s really fun to push the very limits of your offroad vehicle and offroading skills. We also go to say this is the perfect place if you are up for some really demanding challenge. This area is open and its difficulty is rated from moderate to extreme. The length of Moab`s Hell`s Revenge offroad trail is 6.5 miles and it features all kinds of terrains like rock, water, sand, overland, desert, altitude and iconic. The highest elevation is 4,775 feet and the duration of this Moab offroad adventure on Hell`s Revenge is about 4 hours. The best direction to go is North and its connecting trail is the sand flats road.

If you are up for a Moab offroad adventure, you can also visit some other picturesque nearby trails like the Porcupine Rim, Fins and Things, Potato Salad Hill, Upper Porcupine Rim and other. Judging by the video below, the Hell`s Revenge is like a wild rollercoaster experience over natural sand dunes and it`s definitely not for those who lack experience.

At last, follow this link to read more about the story of a guy who survived the Hell’s revenge!