When you own a McLaren 570 GT, you probably aren`t asking yourself if you can drive it on a dusty dirt road. 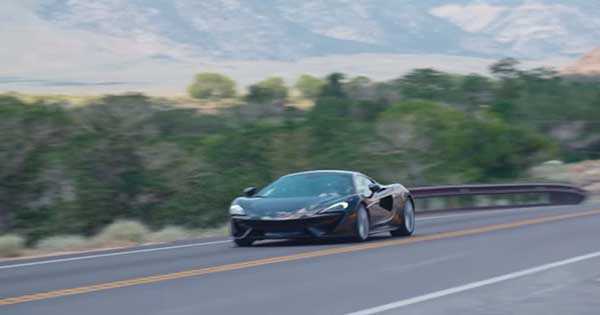 Well, even if you aren`t asking, this video is answering that question – you sure can! Some guys decided to put this theory to the test and so they got some McLaren 570 GT`s and put a ton of gear inside them. While you would think that McLaren didn`t really care about storage space when they built this incredible car, it turns out to be quite the opposite – these guys stacked piles inside the car and they still had enough room for one person in the passenger seat.

While this may seem uncanny, you will see in the video that it`s done perfectly and all the gear ends up being useful in one way or another.

So, they take their McLaren 570 GT`s and drive it down that dusty dirt road, right into the desert. Again, you would think a car like this wouldn`t be able to handle itself when it`s off road, but again you would be wrong – the road is nothing but a small challenge for this beast and while in the end the cars are completely covered in dust, they are still rolling away just as certainly as they were before.

One more thing to know when considering getting your McLaren 570 GT out in the badlands is that not only will it be able to handle everything you throw at it, within reason of course, but it will look awesome while its doing it! Props, McLaren, props.

Do you know how many cars are abandoned in Dubai every year? Find out here!