McLAREN 12C vs 2 Koenigsegg Supercars On The German Autobahn! 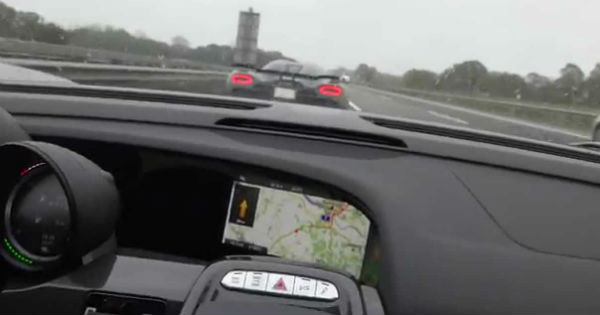 No matter the car you drive, someone will always be faster than you. This is a golden rule that makes four-wheeled contraptions even more enjoyable. With this video, we got a perfect demonstration of this. It shows a McLaren 12C chasing two Koenigsegg supercars on the Autobahn. The chase is a part of a supercar event that is held by a gearhead crew called Petrolhead Events.

The event saw the monstrous machines traveling from Weeze Airport to Dusseldorf. The McLaren is having a hard time keeping up with the Koenigsegg CCX and Koenigsegg Agera.

It`s a very crazy game which includes reaching up to 186 mph on the no-speed-limit sections of the Autobahn.

The McLaren 12C is definitely a car with astonishing acceleration, but the Swedish athletes are too much for The Mac. There are moments in this video where you can put money on the British hypercar.

However, the Koenigsegg`s drivers shatter those moments by flooring it and are nowhere to be seen. Nevertheless, all three supercars have V8 engines and all three of them possess the power to spit flames.

Unfortunately, we are not able to see that because that only happens with upshifts, when the two Koenigsegg supercars are far away from the McLaren`s camera. Watch the awesome chase below and tell us what you think!