The second Zonda 760 built was destined to four-time F1 World Champion – Lewis Hamilton and it goes by the name of Pagani Zonda 760LH. The LH of course, stands for Lewis Hamilton. The 760LH has an amazing bright and purple carbon fiber combination. The ring or wheel locks surrounding the exhausts, and the body on the front lights are all painted in this combination. This paint combination is also used in the interior that is all filled with all kinds of purple details. 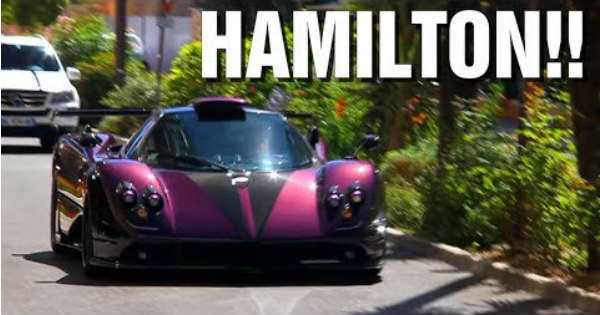 There are also many details on the car that are designed exclusively for the world champion. The Zonda LH is a very rare Zonda 760 that has a manual gearbox installed. It features a NA V12 engine that produces staggering 760HP and 574 ft-lb of torque. Now, we don`t know if many people know this, but it looks like Justin Bieber and Lewis Hamilton are actually very close friends. In fact, the magazine Rolling Stone went as far to state that the two of them are actually BBFs. Their alleged bromance was just recently spotted cruising around Monte Carlo in Hamilton`s Pagani Zonda 760LH.

Now, given Bieber`s traffic violations and crashes with supercars, we think he can learn a lot from the four-time world champion on how to handle a powerful car. Having said this, we think this friendship can help him regarding that. However, this was not the first time Lewis Hamilton and Justin Bieber were seen together. Justin Bieber even came to congratulate Lewis Hamilton after winning the Monaco GP in 2017.

Lastly, if you have the stomach to see the one-off Pagani Zonda ZoZo crashed, click here!