The last thing that comes to your mind when you buy a very expensive super car is that you would crash it just some period after you purchased it. Hereby owning an expensive super car means that you would have to take some great care about it and avoid any potential dangerous situations, but this Bugatti Veyron was not very fortunate and it crashed somewhere at the Andes Mountain. So how on earth could such expensive car find itself in the middle of nowhere and get some very serious damage? What do you think was the reason for this Bugatti Veyron Crash? 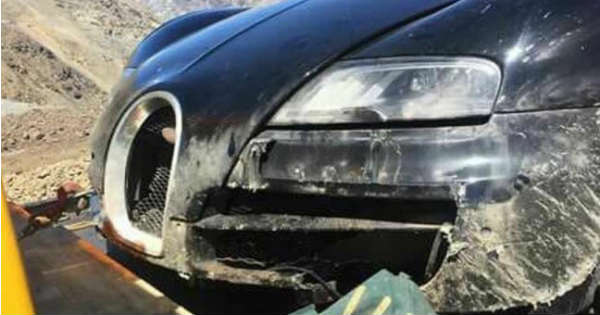 Well, a Bugatti Grand Tour was being held on the roads of Argentina and Chile. Dozens of Chirons and Veyrons are gathering up and go on a pleasant ride for 10 days, starting from the October 12th to October 22nd. But this Veyron was not that fortunate and ended up the tour much earlier.

There is some significant damage at the front and the back. Though this might not seem that bad, we must take in consideration the fact that if it has some damage on the front and the back, it must have some damage at the bottom that can be devastating for the car. We can see some pictures from the car and it really does look bad. We can even see that the Veyron is being towed away with a tow truck.

It is very unfortunate to see this ultimate beast having such bad luck. What do you think, what was the cause for this Bugatti Veyron Crash?