A lady driver and owning a Hot Rod is everyone`s dream. 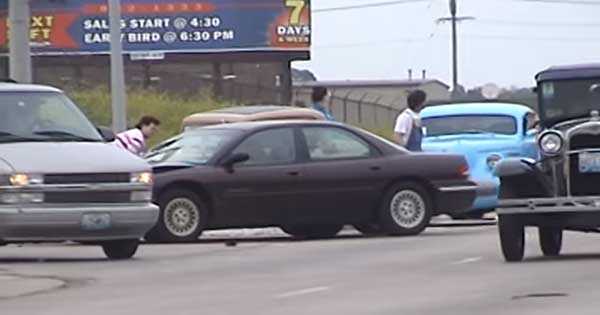 Their price nowadays is very expensive and once you get the chance to buy one, make sure to maintain and take care of it. It is extremely difficult to find a Hot Rod in its original condition; they are either rusted or have some mechanical issues. The most logical thing to do, and probably the only thing left to do, is to fully restore it.

But how would you feel if someone crashed your Hot Rod after months or even years of hard work? Such was the case in the following video where a lady driver crashed into a Hot Rod on a parade. What seemed like a peaceful and careless drive, ended up in disbelief for this Hot Rod owner.

We see cars waiting at a traffic light on a street which was occupied by Hot Rods due to a parade. A guy was filming the whole event and that is how he managed to capture the moment. Namely the lady driver tried to cross the street but what she actually did was that she blocked the road of the Hot Rod which cost the whole crash.

Police arrived shortly after and cleared the area. Some other drivers from the parade stopped by to take a look and see if they could offer some help. Though the car was not very damaged, it was still enough to destroy the man`s dream to finish the whole parade. What do you think whose fault was it?