It doesn`t matter if you`ve been a driver for a year or for 15 years, you`ve probably never had a key fail like this happen to you. The guy in this video approaches his car and whips out his key – pretty normal, right? Well, what happens next isn`t normal at all – when he presses the remote unlock button, his car stays silent every single time. However, every time he pushes the button, a car comes alive across the street. Turns out, he was using his own key to remote unlock a completely different car! 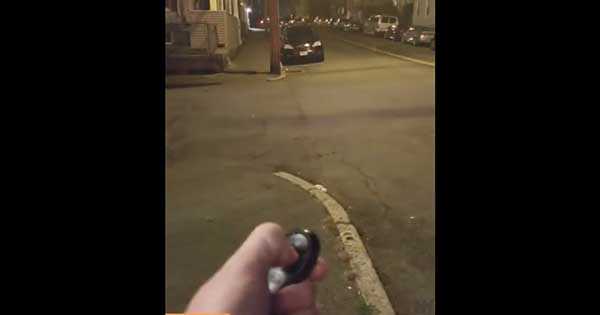 Now, I know what you`re thinking – that`s not his key and that cannot possibly be his car, but there`s a good chance that you are wrong, according to this incredible video. After showing us his key fail to unlock his own car over and over again, the guy approaches the beast that is his car and unlocks it manually with the key that he used to remote unlock that other car.

He inserts the key in the ignition and lo and behold, the key works and the car roars to life, so we are certain that it is in fact, his key and his car. However, that leaves the mystery of what is the situation with the other car. How come the codes that the cars are transmitting are the same? Were they made by the same manufacturer?

Did this guy tinkle with his key and car lock a little bit and made some variations that allowed him to do this, or was it a completely freaky accident? Finally, if your car key remote does not work, this might be the reason!