The way things are in today`s modern society of consumers, it seems pretty `natural` to develop a special `relationship` with certain items that are present in your life for a long time. I`m sure that you have heard the saying “The things you own, end up owning you”, right? But, we do not plan to start a philosophical and psychological debate about our contemporary way of living, but just wanted to make a point that we tend to emotionally attach with some of our possessions. In some cases, even too much! Such is the case with this guy who owns a 1973 Ford F250 pickup truck called “Highboy”, who made a pretty original and interesting Ford F250 ad, when he decided to sell it.

And when it comes to us, the Gearheads, it is needless to say that many of us had developed a very special bond with our vehicles. Regardless of whether we are talking about some classic Detroit muscle from the golden period of the late 60s and early 70s, or perhaps some of the very special `all-time` models of Zora Arkus-Duntov`s Chevy Corvette, people love it! And that doesn`t change even when the “time to say goodbye” comes…

Those of you who are Into Ford trucks, know that back in `77, Ford F250 models underwent profound changes with the frame, the drivetrain, and most significantly, there was a new suspension, that made the new model two inches lower than the previous. And that is how the older generations got their nickname, “Highboys”.

Now, let`s return to our main character of this story. The man really loves his Highboy, and even though he wants to sell, he cares a lot about who will be the new owner. So he has `a few conditions` of his own.

Thus, we are showing you photos of his original ad, word to word! So just in case if you got intrigued to get behind the wheel of his Highboy, read it first, and see if you qualify to become a potential owner to his Ford F250! Just take a look at this Ford F250 AD!

For those of you who want to learn something about the new Ford F250, go to this link. 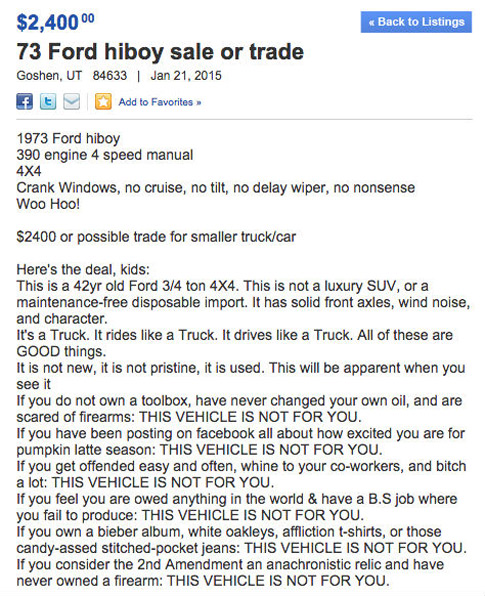 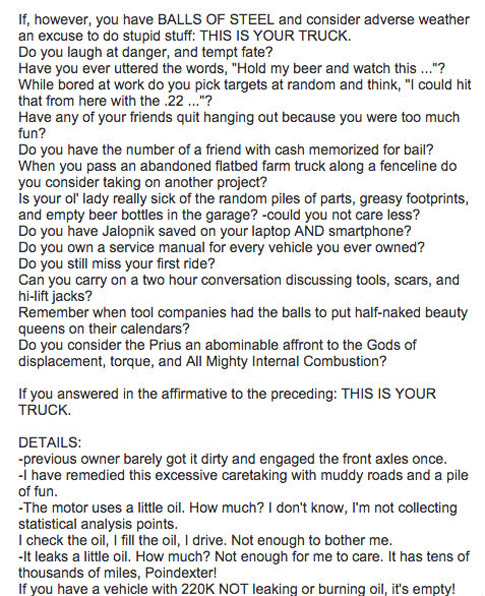