The police are the one that offers us feeling of safeness whenever we are out there on the road. But, we have previously encountered many videos in which police officers harassed innocent people without any reason. Hereby, we decided to show you the following video in which you can see what might happen to you when you block convoy in the middle of London, UK! Though some of you might find this video controversial, you be the judge by the end of the video and decide who made the biggest mistake. Namely, we see a police convoy moving from the left and were supposed to go straight. 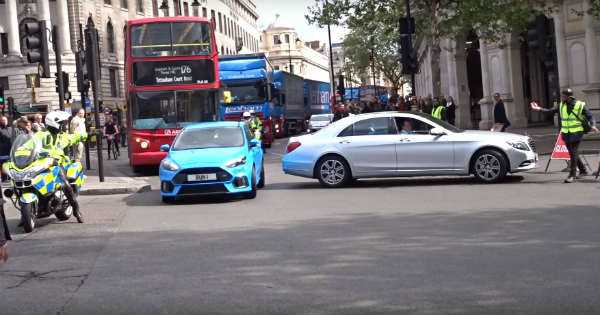 Meanwhile, the bus and couple of cars move to the sides so that they can make some room for the convoy to pass. However, there was one Mercedes driver that simply got stuck in the middle and could not move forwards or backwards. One police officer stopped just besides him and yelled that he does not care whether if he is stuck or not, and that he must move his Mercedes away.

Eventually, after being harassed by the police in front of dozens of people, the driver decided to go in the same direction as the police convoy was going. Keep this in mind and be aware what might happen to you if you block convoy the next time you are out on the streets in London. What do you think, should have the police officer shouted at him like that?

Lastly, if you want to see how these situations are handled in India, follow this link! Hilarious!