When you`re trying to build a shortened VW, you generally want to see if the car will run, but here you have the opportunity to see how it`s actually made. The video opens on a guy named Milo that presents two halves of an old VW Golf that he chopped in half. He says he wants to weld it back together but without the midsection of the car. However, first he demonstrates that pretty much everything important in the car is in the front section, as he is able to start it up and run it in place without any problems. 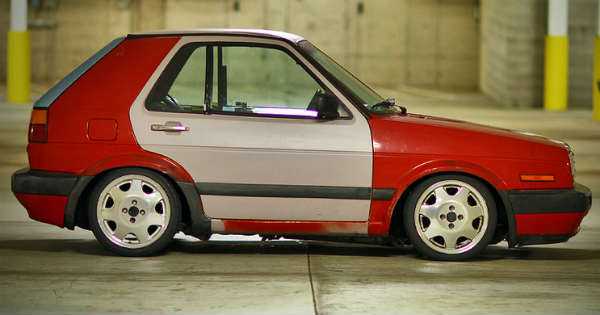 After a bit of measuring and filming in the rain, Milo gets in the car and declares that he shall make it as short as possible while still being functional! Now, I want to see this shortened VW become reality as much as the next guy, but this thing is going to be a micro Volkswagen when Milo is done with it! He starts chopping up the car even more, to remove any unwanted material that could be spared. Piece by piece, Milo removes more and more of the old Golf, and then tries to piece it back together!

Finally, he puts the two halves of the car in position and lo and behold – they fit perfectly, but the car looks a lot smaller. Then, he clamps the two halves together and starts welding them. After a bit of work, he fires up the new little car and it works and looks like a charm!