Ever get that guy in your neighborhood that`s always causing you all sorts of neighbor problems? Well, a guy in the United States got so tired of his dastardly neighbor`s antics that he got some cameras and set them up so that he could see what the rude neighbor is up to all the time. In the end, he managed to catch him roughing up some border dirt between the driveways and throwing it in the driveway of his neighbors! Of course, that wouldn`t pass pretty much anywhere, so the police is called in after a few times that this happens. 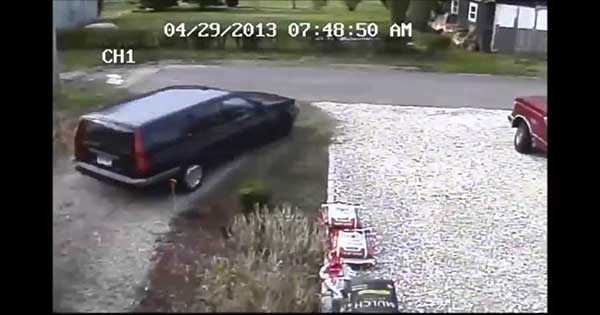 There is actually a whole series of these clips where they provide an extension to the story, so you can see what happened after this video. Anyway, the neighbor problems didn`t go away with just that one dirt repositioning. The guy also drives his car over his neighbor`s territory, or at least a small corner of it – as well as through the dirt between the driveways.

He passes over the driveway with his lawnmower, doing damage that could have very easily been avoided had he just gone two feet to the left instead of straight through other people`s driveways. He kicks some more dirt over his all-vigilant neighbor`s driveway and he doesn`t even flinch when running through the piece of land that isn`t his property. This is truly a neighbor from hell and not many people could handle living to a person like this. Nevertheless, I hope the police was called in and settled the matter.