Mat Vlogs is at the famous Estoril Circuit in Portugal where he reviews the new BMW M5 2018. The M5 series were always associated with performance. This super sedan has been around and kicking in different forms since `84. Even though the M5 has an enormous history, the new 2018 is not afraid going into the future. However, the most important thing of the M5 series has always been the engine. In the 2018 model you can still find the rocketing 4.4L twin-turbocharged V8 engine. That said, it produces up to a very delightful 600HP and 553 lb-ft of torque. 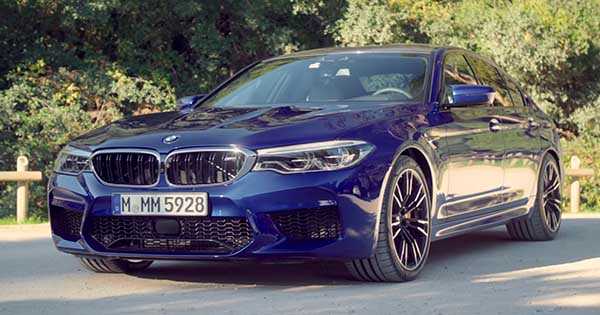 In combination with its AWD and eight-speed automatic transmission, the new M5 hits 60mph in just mere 3.2 seconds. With that said, the new M5 doesn`t fail to satisfy when it comes to performance. Apart from AWD it also features a 2WD mode that sends power only to the rear for all the insane drifts you can do. The car comes with M-specific compound brakes. However, you can also go for carbon ceramic brakes.

These brakes maybe take longer to reach optimum temperature, but they can definitely endure track driving for much longer than your ordinary steel brakes. The aesthetics of the design are pretty similar to its predecessors but a bit more aggressive. You`ll see sharper lines and larger air intakes on the front bumper. It also features a carbon fiber roof. The side mirrors feature a very unique M style. The M5`s rear bumper really stands out with the hallmark quad tailpipes. For more information on the brand-new BMW M5 2018 check out the video below.

Finally, compare this one with the 2017 BMW M5 and see what differences you can spot!