The Ferrari anniversary redoes a 30-years-old Ferrari F40 from the Gas Monkey Garage! 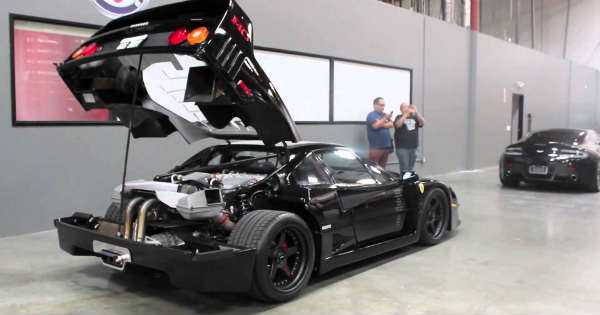 30 years ago, Gas Monkey Garage celebrated the release of the Ferrari F40. Photographer Pepper Yandell took some epic snaps of it, blazing down the highway, literally. Fire was shooting out of its exhaust, the surroundings were blurry, and the jet-black beast just roared on down. Of course, this didn`t actually happen, it`s just that the photographer was really good!

Also, the montage was even better, but this Ferrari anniversary brings about a final result that is nonetheless awesome and it does justice to the original shoot 30 years ago!

First, the guys prepped the car, parked it in the middle of the garage and then the photographer did his magic. I assume this was done by super positioning one picture on top of another and then another, but those are the skills of the photographer trade!

What I really like about this Ferrari anniversary shoot is the way they added the flames coming out of the exhaust. Of course, there is no way they would actually be able to capture those flames on camera, so they had to be added on. These guys do a wonderful job at showing how that`s done – with a can of gas, a spray pump and a lighter.

However, the arm and the can are edited out later and it looks like this beast of an F40 is tearing the road up so much that it`s actually flaming itself. In the end, the final product is very impressive and I`m so glad we got to see this video that shows how it was done.

This is a home run for the guys at Fast N` Loud not only because of the professionalism involved, but because this Ferrari was brought to its current condition by the very same guys!