The McLaren 650S Spider is a 641HP with 207mph top speed luxury sports car priced at over $240.000. It has a 3.8L V8 engine that produced 500 lb-ft of torque. It`s largely inspired by Mclaren`s fascinating $1.2M P1 hybrid super-supercar. However, one donkey that goes by the name of Fitus was found at the very center of an extremely bizarre court case that happened in the German state of Hesse. What was so bizarre, you may ask? Well, the creature decided out of the blue to dine out on this yummy orange supercar that was parked not far away from its paddock. 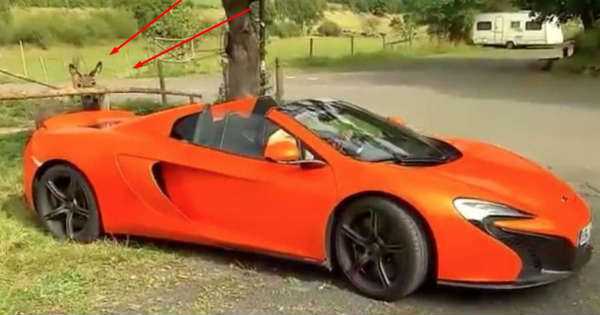 This was not taken lightly by both the owner of the McLaren and the German authorities. The donkey managed to cause a significant damage to the McLaren and someone had to pay for it. The damage the donkey managed to cause on the McLaren 650S Spider was estimated at $6.5K. Because of this significant damage caused on his car, the McLaren`s owner decided to ask for compensation. However, he was not able to claim any compensation from the insurance company that covers the donkey owner. What`s the reason for this?

Well, the insurance company reckoned that the 49-year old McLaren owner should have simply chosen a better spot to park his supercar. Because of this, the entire incident went to court. At court, it was decided that the owner of the donkey was actually liable for damage done. As to why the donkey named Fitus thought the McLaren 650S was a tasty meal, both the McLaren`s owner and the police have theorized that it mistook the orange supercar for a tasty carrot.

At last, check out this story where billions of bees found a home in a pickup truck!