This is definitely the ultimate sound comparison regarding two hypercar titans – the Ferrari FXX K and the McLaren P1 GTR! When Ferrari unveiled the FXX K it was obvious that the guys from Maranello managed to create one of the greatest hypercars of all time. In fact, it`s so powerful and extreme that they decided to censor its name. What profanities the X`s hide though we can`t tell for sure. However, we can say that the K in the name stands for KERS. Ferrari borrowed this technology from their F1 team and it`s a system that recovers the car`s kinetic energy when under braking. 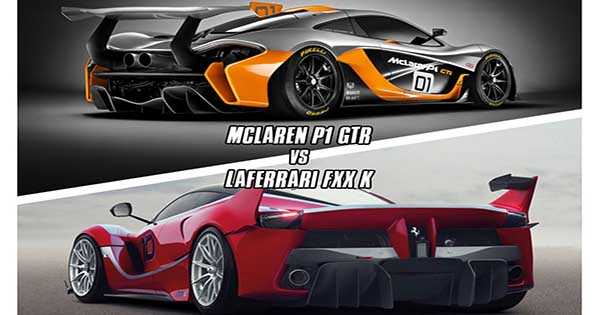 This energy is then stored in a special reservoir for later use when accelerating. However, this is a sound contest and the KERS doesn`t contribute much.

However, what contributes to the monstrous sound of the Ferrari FXX K is the great Ferrari V12 engine that lurks inside. On the other side of this awesome sound comparison we have the McLaren P1. The name alone of this car suggests how important the car really is. This is actually the second McLaren ever build to have the GTR moniker. The first one was the legendary McLaren F1 GTR and this car actually managed to win the Le Mans 24 back in 1995. Like its rival the Ferrari FXX K, this McLaren also uses F1 technology as its huge rear wing features an F1 derived DRS (Drag Reduction System). However, the thing that contributes to the sound here is the award-wining V8 twin-turbo engine. The sound comparison is neatly done with the same external microphone, same weather conditions and the same camcorder.

At last, listen to this roaring Nissan GTR!