We have said this numerous times, and we will say it many times more, always be careful on the road! There are all kinds of drivers out there, and many of them can cause a lot of trouble for you! In recent times, a popular method of getting money is by forcing small accidents on the road. In the video that we are sharing with you guys today, you will see how this looks! This happened in Norway, and it featured a truck driver and a Mini Cooper driver. They are both driving on a road where overtaking is not allowed and where traffic moves relatively slow. 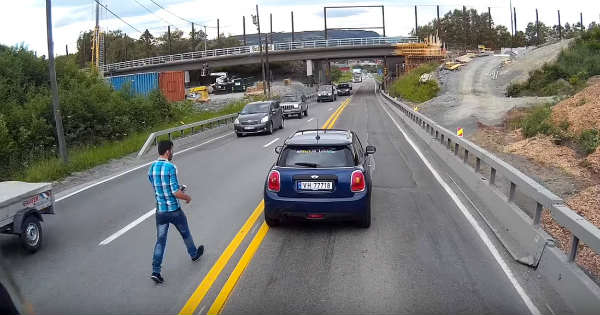 Unbeknownst to him, the truck driver had a camera which filmed the Mini Cooper driver passing him on a double yellow line! After he found out, the Mini driver wasn`t very enthusiastic! Watch this video and see how abysmal driving looks like! We are sure that the Mini Cooper driver will not be getting a single dime from this!

Take a look at this police shootout that was caught on camera in Vancouver!