I bet you`ve always wanted to have absolute certainty of your car when it goes on snow, like this Dodge Coronet SuperBee does. This guy decided that he had had enough of the snow and the ice and he was tired of his car sliding all over the place when he was driving, so he decided to take the matter into his own hands and put drastic actions on the table. One of these drastic actions was to integrate his car with some tracks, much like you would see on a tank. Of course, the thing looks ridiculous, but it`s really effective, so he decided to give it a shot anyway. This is how you turn a car that was never made for snow, into a car exclusively made for snowy terrain. 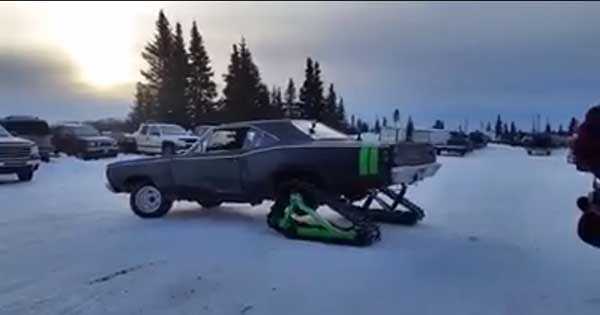 After he decked out his Dodge Coronet SuperBee, this guy went to an automotive rally, according to the video. He effectively made a Dodge halftrack, so why not show it off? In the video we can see how he starts up his half-tracked beast, pulls back and then gives it a nice rumble under the hood, which can only mean one thing: the car is taking off right now.

And it doesn`t take much to get it going – a single rotation of the tracks carries this baby far, far away and having the option to go pretty much anywhere is always nice. I hope this guy was able to get tracks on the front of his Dodge Coronet SuperBee as well, that would look and probably sound really cool!

Finally, check out these cool apps with cars playing on snow!

who says it wasn't built for the snow?

who says it wasn't built for the snow?