This video is really painful to watch, even if the vehicle taking the hits is just an old Honda car. I don`t know what happened that he got so angry, but somehow his keys got stuck inside the car and instead of doing something downright logical such as, you know, cracking a window, the guy decides to grab his hunting knife and a hammer and make a hole in his car. You would think he would try to be conservative with the damage, right? 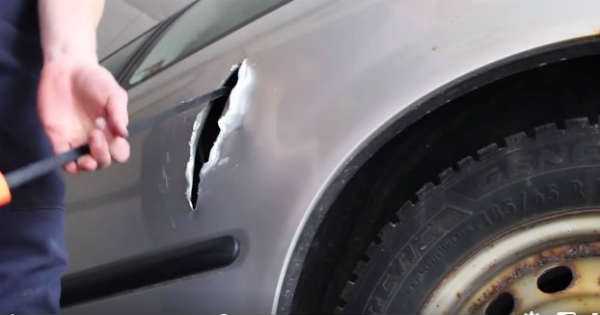 Wrong. If he`s going to throw away that door, he might as well cut a hole the size of Krakatoa in it! He takes his jagged hunting knife, jams it in the door and just starts banging on it like there`s no tomorrow, cutting down into the metal. Soon, he has achieved a full cut of about a foot down the side of his old Honda car, and then he grabs his crowbar and tries to pry it open as much as possible. This, of course, works, since it`s a crowbar and he`s not really being technical about it.

The brute force method at work, ladies and gentlemen. After he widens the gap a bit, he takes his knife again and cuts to the side, trying to make a square shaped hole in the car. Note that this square is about a foot long and about half a foot wide. You could fit a drawer of keys through there, but still the guy just reaches in, takes his keys and shows them to the camera.

At last, check out this simple trick on how to unlock you car in 10 seconds. You don’t have to drill a hole like this guy.

Cutting Into A Car

This guy cut through his car to get his keys out! This is painful to watch 😲Car ThrottleSubmitted by Kevin Weinmann