We are all familiar with how strong a brake rotor can be. But is it powerful enough to withstand a 50 cal rifle? 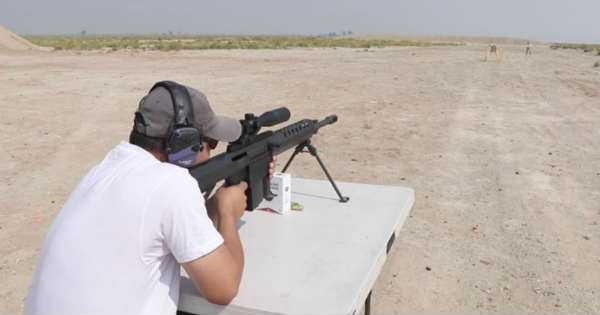 The answer can be found in the following video where a guy puts it to the test. This brand new truck rotor is one inch and a half thick used in Shelby Silverado 3500, so it is pretty big and durable rotor. They are going to shoot it using a Serbu BFG-50A which was sent to him by a friend. He is also using bullets for the BFG-50 from Freedom Munitions. Though the exact distance from the first test is not specified, it sure is a distance far enough in order to be safe.

As he shoots the first bullet, the rifle creates a loud sound and we see a piece from the brake rotor falling off.
There is a slow motion from the same test once again and we see a close up from the rotor. Then they look for the pieces and find two which fit together like a puzzle. There is a hole in-between them which was caused by the bullet.

Then they run a second test, but this time they set the brake rotor sideways. Surprising enough, the bullet seemed to have caused the same damage. Nearly identical piece flew from the rotor with the only difference that this time it was all one piece. There is a smaller dent on the inside, presumably by the bullet.

They run a third test but you have to check out the video for more!

At last, here are 5 facts that will help you understand brake rotors.