If you think you have seen everything when it comes to vehicle modifications, you are utterly wrong and all you have to do is to check out the video below and see that the custom Hellcat Jeep Wrangler is capable of. 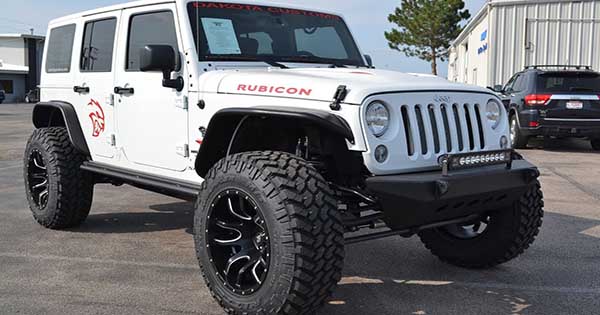 Creating or restoring cars from scratch has not been a decent enough challenge for these boys so they took a step further and decided to literary put together two American classics, the Dodge Challenger Hellcat with staggering 707 HP and a Jeep Wrangler. How cool that is! So they managed to create this prototype called the custom Hellcat Jeep Wrangler which is an off-road vehicle but with 707 HP HEMI V8 engine. And it looks just as good as it sounds.
Though the video is short and just under a minute long, it is enough to see what is really capable of doing.

Once it is out in the mud or on the field, nothing can stop it. We can see how it shoots gulfs of ground behind it while vigorously turning its tires. Imagine taking this prototype out for a spin in your neighborhood. Everyone will be amazed hence this Hellcat Jeep Wrangler is super fast. It was built by Dakota Customs and it looks like they did an amazing job of making this unique jeep.

We would love to see more of it so stay tuned. What do you think about it, will anyone ever build something more amazing and breathtaking such as this Hellcat Jeep Wrangler?

At last, here is another staggering video of the Jeep Wrangler Unlimited!