Going on a long trip in a vintage 1985 Volkswagen Bus is a magnificent feeling. Franco Paltrinieri is an Argentinian who was working a usual desk job. However, he decided that working from 8 to 5 was not the life for him, so, he managed to forge a different kind of life. There were a lot of naysayers that were made up of friends, family and colleagues, but he had none of it and decided to do his thing. He was determined to take a long trip in a 1985 VW Type 2 bus. To be fair to those who did not believe in this journey, his dream plan was to take a trip from Argentina all the way to Alaska. 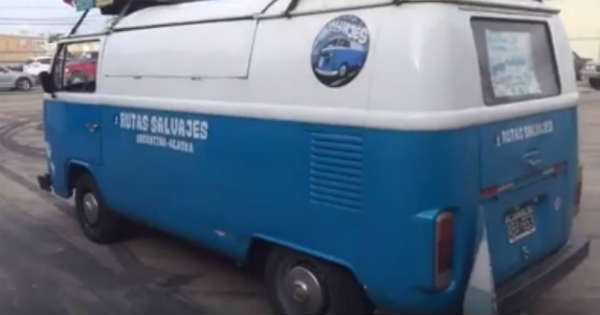 This happened five years ago. Paltrinieri has visited 19 different countries in his faithful VW bus. This guy has gone to hell and back with his 1985 Volkswagen Bus. The brakes have failed him numerous times and even on one occasion he almost crashed into a house/café. Franco has experienced his van completely breaking down in the Andes which forced him to hitchhike for miles in order to get help. Franco has navigated the infamous Bolivian death road. He has also seen death and crime first hand on his trips.

However, many wonderful and pleasant things have happened to him. One of these is that while on his journey Franco has found a lovely partner. Her name is Olga Khrustaleva and decided to join him in his adventure from Argentina to Alaska. As we said, this happened 5 years ago so we are more than happy to say that they have successfully completed their trip. Now, they have visited the Gas Monkey Garage and tell us their fascinating experiences.

At last, check out the travel blogging couple that earns $7,000 per blog post.