We all know that finding yourself in the middle of the dessert is a dangerous situation, let alone if your vehicle breaks down, and this was exactly what had happened to this man which made him come up with the best DIY escape plan you have seen in years. Emile Leray is the name of the French mechanic who got stuck in the middle of a desert while taking a road trip to Morocco back in 1993. His all time love, the Citroen 2CV, was the car he traveled with. Back in his home in Melesse, he has bunch of them and most of them have been modified in any way. But this specific car tune has saved his life. How is that possible? 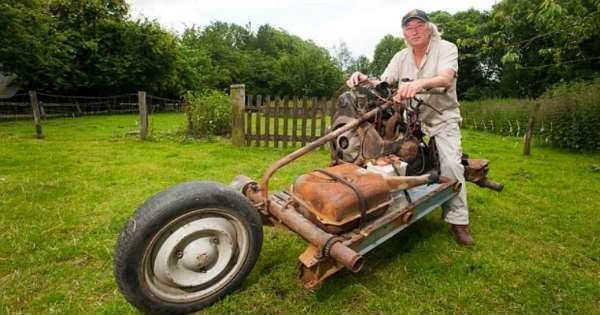 It was not his first time that he traveled to Morocco, so he knew most of the roads and places. His problems started when he was stopped in a little village by the name of Tilemsen by the military. They demanded him to return to Tan-Tan. Instead he took another road. Then, out of the blue, he hit a rock which destroyed his front axle and the chassis.

He did something amazing afterwards. He used the body as a shelter. But what did he do? He turned the Citroen into a fully functional motorbike! He spent 12 days and 11 nights in the desert until he was finally ready to go back to civilization. Luckily he took lot of tools with him before he went on the trip. Check the video for the full story about the ultimate DIY escape plan!

At last, check out these street legal cars made out of bumper cars.