There are many amazing old bikes out there, but this one is a special treat for all antique bike lovers – a 1928 Henderson Deluxe. 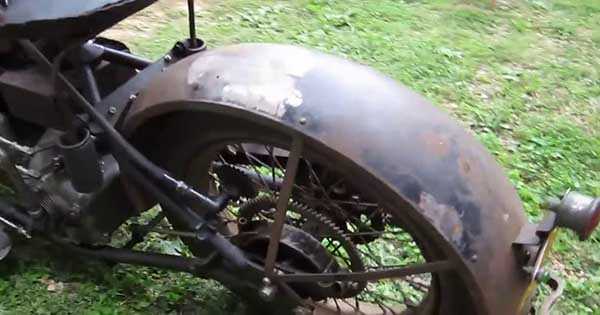 This bike was found in Palmdale in California and the guy that got it spent ten to fifteen years to finish repairing it as much as he could. Of course, the bike still carries a significant amount of rust which dampens its dashing style, but under all of that rust you can see the swagger that this bike used to drive with – it`s simply impeccable and the bike looks fantastic. This bike is just under 90 years old and can still run when given the proper maintenance and attention, and I think this guy was more than pleased to provide both.

The 1928 Henderson Deluxe has a typical bike starting procedure of the time it was made, but it may look very unusual for today`s bikes. This is because technology has evolved to the point that everything that the guy does by hand is now done automatically by the bike`s systems.

These are things like turning the gas on, determining the level of choke for priming and then giving it a quarter to half throttle to start it up. After it`s started, this 1928 Henderson Deluxe sounds mind-numbing, as it emits a sound unlike any other bike of today, and it`s absolutely worth it because this old beast represents pure, brutal power that simply can`t be tamed. When the guy finishes restoring it, I look forward to seeing it again!

Now, check out this bikers` rescue that looks like a movie scene!