This steering wheel is from the 1 of 1 Maserati Boomerang! This amazing car was first unveiled as a prototype model at the 1971 Turin Motor Show. However, this concept was transformed into a selling model at the 1972 Geneva Motor Show. The 4.7-liter V8 engine was produced by Maserati and it could deliver amazing 300 horsepower. The top speed of this sports car was unbelievable 300 km/h. 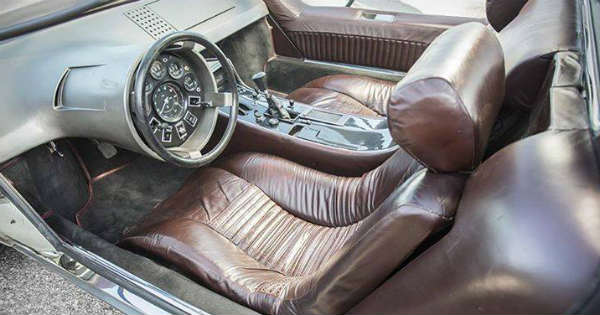 It was a miracle at the upcoming motors shows in London, Paris and Barcelona. Journalists said that the vehicle looked as it was going 100 mph standing still, so the design was very unconventional for that time. This unique vehicle was sold back in 1980 and after that went trough few careful restorations. At the Bagatelle Concours in Paris in 1990, was hand signed on the rear panel by Giorgetto Giugiaro, who was a judge.

This car’s edge shaped body was used as an inspiration for the upcoming Maserati models, the Lotus Esprit and the very popular VW Golf Mk1 designed by Giorgetto Giugiaro in 1974. In February 2005, this Maserati Boomerang was sold at the Christies` International Motor Cars Department for $1,000,000. Few years ago this car was again sold for $3,500,000.

In the video below you can see the car filmed in 2014 with a HQ quality. What do you think about this amazing car? Please share your thoughts in the comment section.