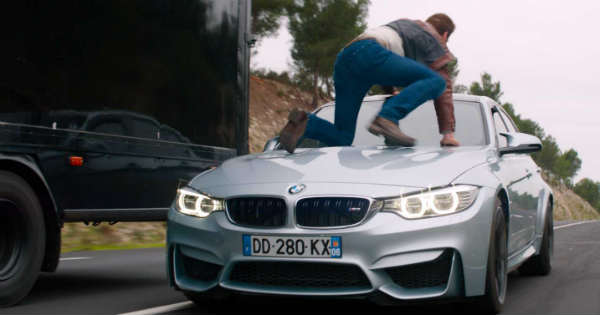 This car heist scene from the movie Overdrive really has it all. Two guys roll up in a gorgeous BMW and block the path of a huge 18-wheeler truck with the intention of stealing the prized vintage Bugatti inside. The guy inside, of course, doesn`t want his precious cargo taken from him and starts shooting at the guys just as they ram their car into the front of the truck, trying to get it to stop. However, there is another surprise – the driver of the BMW can do some awesome stunts so he jumps out of the car while being shot at and gets over and behind the truck cabin.

Meanwhile, another guy is on the roof of the truck and now that his brother is here, this car heist goes very smoothly. They cut the red airline to the wheels which for some reason makes the truck lose its brakes, and then they release the Bugatti from the inside of the truck. They get in the vintage car and drive away, just as the BMW’s wheels collapse and the truck flips over. Don`t worry though – nothing happens to the vintage Bugatti – there isn`t even a single scratch on it!

Finally, read the full cast and rate this movie, here!