A racing driver participating in a Speed Hill Climb located at Winchombe crashed his 1924 Bugatti worth $320,000 and then walked away to recover with a pint. Edmund Burgees, age 56, crashed the legendary car when the brakes failed as he went through a corner. He was unable to regain control of the classic Bugatti as the car turned over. At first, the vehicle began to tilt around the hairpin before crashing heavily into the wall. He was very lucky to walk away from this unscathed because his head narrowly missed the Armco barrier. After the miraculous crash, the paramedics have given him the all-clear and the headed directly to the bar. 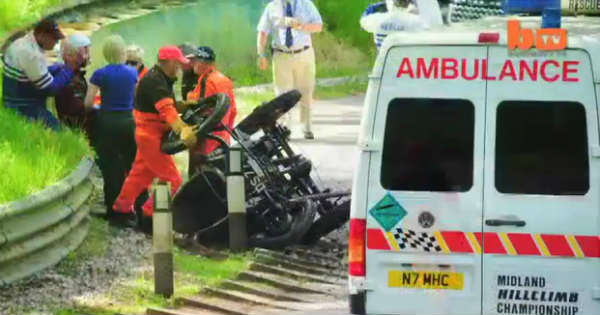 Edmund Burgees said this happened very suddenly as he was approaching the hairpin a bit faster than usual at 30mph. When you see how much damaged the 1924 Bugatti is, you`ll be amazed that he could pull himself out without any injuries. Some people may say that he shouldn`t have raced such a vintage classic like this one.

However, we think that even though this car is extremely old, it was being used for what it was designed for and that`s racing. True classic car fans rarely get to see these machines in action. We are very glad Mr. Burgees was not hurt in this hill climb.

However, check out these car crash tests that changed the way cars are built!