Developing and manufacturing car parts takes great precision and a steady hand despite all of the modern machinery available, and in the following video we take a look how such steady hand managed to make a fully functional miniature V10 engine. 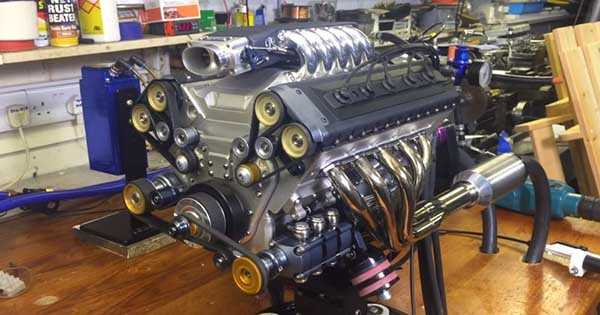 There is literary no space for a mistake, hence even the slightest 10th of an inch might cause the engine to fail. Remind yourself of all of the work that is needed to make one engine and put that into 1/3 scale model. Everyone would be fascinated to see such miniature V10 engine being fully functional. Though this is actually a replica, do not let that word fool you because this little monster is capable of much more. It runs like a well-oiled machine and sounds like a powerful super car.

We see the miniature V10 engine 125cc in action. It took lots of time to finish it as well as commitment and patience. The engine is placed on the table and it has Megasquirt MS3 fuel injection which is actually with full sequential ignition by using COPs. Though we do not have much information about its implication and what are his future plans with the engine, it surely is a masterpiece of its own. The oil system it uses is a three stage dry sump. It also has a hydraulic triple plate clutch. The video is fairly short but it is enough to make your eyes pop and wonder in the precision of this ultimate miniature V10 engine!

On the other hand, this miniature V8 will blow your mind!