Some of us have probably witnessed a low pass fly-by of a plane and were convinced that it is a terrifying experience for sure. 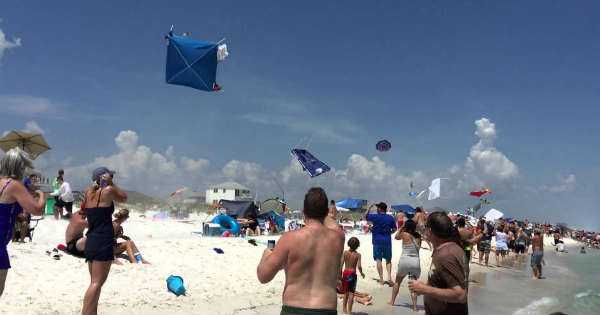 Besides their enormous size, their engines` sound is as loud as it can get. Moreover, we all have the fear inside us saying that the plane might crash at a moment. Such a tourist attraction can be found at the Maho Beach where low pass fly-bys are a normal occasion. But after a woman was killed when she was blown off by the strong power of the engines and dies when she hit the ground, safety measures were taken. In the following video we take a look at a somewhat similar situation but this time we are talking about a military jet which is not near as close to the beach.

The beach seemed crowded and the people were having a great time there. They saw military jets passing by shortly after and though it would be a fun thing to look at so they started filming. Little did they know that the military jets were close enough to cause a complete chaos on the beach. Their powerful engines were creating so much thrust that the peoples` umbrellas and towels were left scattered all over the beach.

Despite this low pass fly, most of the people were still having a great time and laughed as their belonging were up in the air. After all, it is a moment from their vacation they will never forget!

At last, check out the top 10 most dangerous airports in the World.