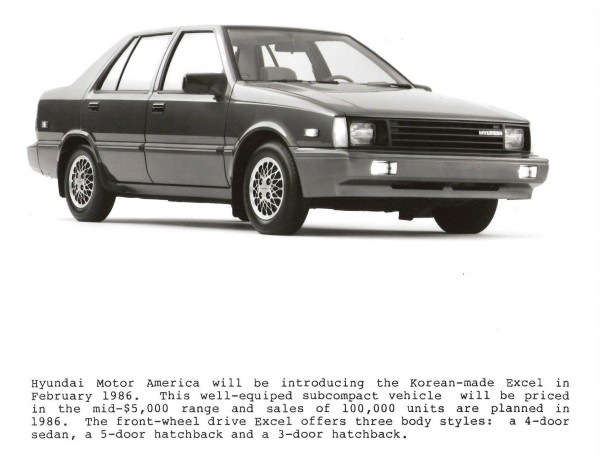 The Challenges and Passion of Yesterday and the Praise Received Worldwide Today! These are the 9 Most Defining Moment in the Hyundai Motor History!

Hyundai Motor Company was founded in 1967, and launched Korea`s first passenger car, Pony, in 1976. It set up subsidiaries in the U.S. and Canada in the 1980, and in 1986, the company exported the Excel for the first time to the U.S. Through passion, a spirit of challenge, and unsparing investment in R&D, this period saw the birth of Azera (1986), Sonata (1988), and Elantra (1990), which are still popular models, loved the world over today.

From 1996 to 1988, the Namyang Technical Research Center and the Turkey and India plants were inaugurated, and a wide range of models including the Galloper (1991), Dynasty (1996)Tiburon (1996), EF Sonata (1998), Centennial (1999), and Trajet XG (1999) were launched in the market. By1996,the company exceeded 10 million units in cumulative production. Hyundai succeeded in independently developing such world –class high performance engines as Alpha (1991), Epsilon (1997), and V6 Delta (1998) engines. Investment continued in the R&D of future automotive technologies as demonstrated by the development of the concept cars HCD-I, II, and III, solar –powered vehicles No.`s 1 and 2, and the hydrogen fuel cell vehicles.

2000-2005 -- Expansion of the Global Network Amid Worldwide Customer Praise!

Re-launched in 2000 as an automotive specialist, Hyundai Motor Company`s models received rave reviews from customers worldwide, with both the Santa Fe snatching the top spot in customer satisfaction in the U.S. (2001) and the Sonata being selected as No.1 in performance, driving, and design research by J.D. Power and Associates (2002). The company`s global network was reinforced with the opening of the California Design  & Technical Center, Europe Technical Center, U.S. Proving Ground , and the Alabama factory just to name a few. In 2003, Hyundai strengthened its image as an eco- friendly automaker by being the first in the industry to proclaim its commitment to “Global Environmental Management.” It was also during this period of remarkable growth, in 2005, that Hyundai entered the 100 Best Global Brands list.

Hyundai Motor Group solidified its status as a global brand by reaching $ 86 billion USD  in sales and sixth worldwide in total production in 2006, not to mention receiving the honor of having i30 (Australia, 2007) and Genesis (North America, 2009) as the Car of the Year. The Tau engine, developed with Hyundai`s homegrown technology, proved the company`s technological prowess to the world by being named among the world`s 10 Best Engines by the leading U.S. auto publication Ward`s Auto from 2009 to 2011. Moreover, Hyundai continued to unveil different concept cars throughout this period including the third generation fuel cell concept car i –Blue, and i-Mode with an eco-friendly powertrain. It put into place a firm foundation for reflecting the needs of local markets more accurately with the completion of the second plant in Beijing and the Czech Republic plant.

Hyundai shared its vision with the official announcement of its new brand direction and slogan “NEW THINKING. NEW POSSIBILITIES.” The i40 and Sonata Hybrid were launched and Hyundai`s list of prestigious recognition grew with Elantra selected as the North America Car of the Year, ix20 receiving the highest five-star European New Car Assessment Program (Euro NCAP) rating and the Gamma engine being selected among the world`s 10 Best Engines by Ward`s Auto in the U.S. Hyundai became a true leading global company both in name and reality with the full operation of its Russia plant and the achievement of 5 million units in cumulative sales in Europe and 2 million units in cumulative exports to the Central and South American markets.

Amid the avid response that the Elantra, Sonata, and Genesis are receiving from customers all over the world, the all new Santa Fe is launching in 2012. Hyundai will continue to offer premium quality to maximize customer satisfaction and strengthen its systems and R&D capabilities to respond proactively to rapid market changes and secure core technologies. With the completion of the third Beijing plant and Brazil plant, the year 2012 will become year that leads Hyundai to become a beloved brand worldwide.

Hyundai`s 45 Years to Become a “Lifetime Partner in Automobiles and Beyond”!

“Live Brilliant” is Hyundai`s newly established brand direction and brand campaign name for 2012, which communicates that a more brilliant life awaits you with your Hyundai car. It incorporates the company`s will to go beyond simply  providing a means of transportation to becoming a special brand that renders the lives of its   costumers more special. Launched worldwide, the “Live Brilliant” campaign will show customers to see the Hyundai brand in a new light, as a brand that goes beyond quality and touches and fulfills their emotions.