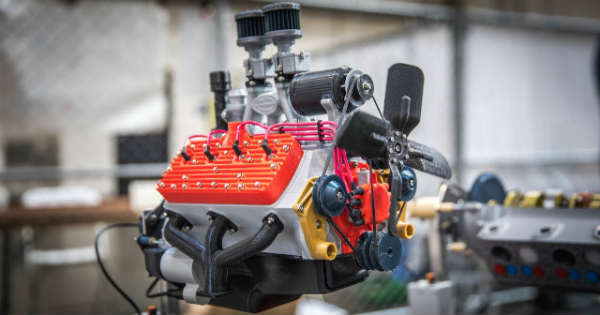 Back when 3D printing was getting started, Eric Harrell had a disassembled engine in his garage and he got the idea of scanning it and putting it on the internet so that everyone could have their own printed engine. Of course, this wasn`t just any engine – it was from a Toyota. It moves and runs exactly like a real engine and it`s not even his only one – he also put up and printed a Subaru engine and even reverse engineered an engine just from pictures and little pieces of information here and there. He describes how he sees all the parts in his head and goes from there.

Eric always starts building his soon-to-be 3D printed engine from the engine block and then he goes on to other parts. He also describes how there are more and more models popping up on the internet and that anyone can print them, even on the cheapest 3D printers. In the future, he thinks he could put a ring or a sleeve in the piston and building a methanol engine that would actually work. The best piece of information? Over 97% of the engine is 3D printed, not counting springs and screws that have to be metal. He also builds transmissions and other stuff, check out the video and see for yourself!

Could we 3D print houses? Yes, take a look!