Watching the 2018 Audi RS3 Drag Racing many other powerful cars is definitely a drag race worth checking out. The upcoming 2017 Audi RS3 is significantly faster than both the Mercedes-AMG A45 and its predecessor. The other cars featured in this drag race are obviously there just for comparison. The 2018 RS3 have 480 Nm torque and 400PS. However, it`s also way lighter than its predecessor thanks to its engine construction and aluminum hood. Just recently, Mat Watson from the YouTube channel Carwow said that he likes this car more than the Mercedes –AMG A45. He said that the 2018 RS is faster by 0.3 and also quicker to 60mph. 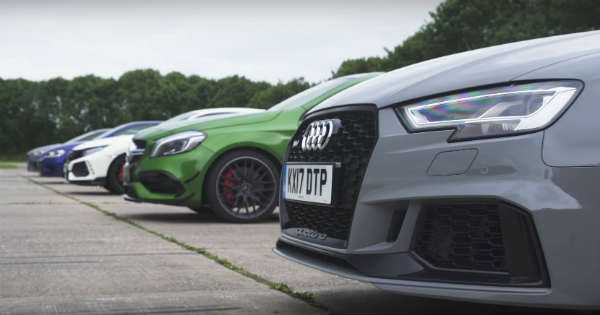 In this drag race you can see the Audi executing the ¼ mile in just 12.2 seconds while the Mercedes did it with a slower time of 12.9 seconds. As we previously mentioned, the 2018 Audi RS3 drag raced three other cars as well, which are the Focus RS, the new Civic and the Golf R. These cars were only involved in this drag race for comparison reasons and the Focus managed to win in this category, with the Civic following at second while the Golf R finished last.

Yeah folks, it looks like the mighty AWD Golf is slower than the new Civic. However, it`s worth mentioning that the Golf R was tested without its DSG gearbox. We believe that if the Golf was tested with the DSG gearbox than it would`ve been faster than the new Civic, but not faster than the Focus. Speed is definitely important. However, we can`t help but wonder which one of these is the most practical to drive on an everyday basis.

Finally, if you are in for more import drag racing, follow this link!