Over the years some utterly amazing modifications have been made on cars, trucks and other vehicles. These modifications combine the ingenious ideas people have as well as their will to make something brand new and unique. That is in the following video we present you the coolest engine swap you have ever seen so far, the rear engine turbo Honda Civic. This man was brave enough and had the will to make something, from what we know, no one has done before. 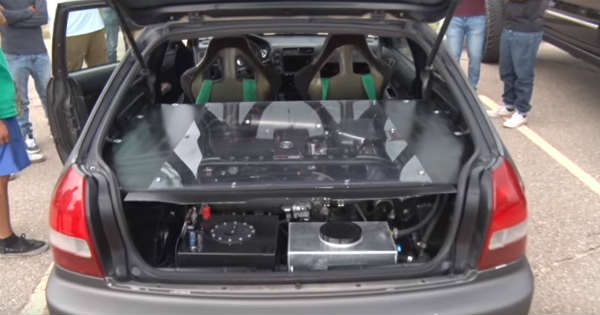 But we are not talking about replacing your old engine and putting a bigger one at the same place in the front, this modification is different and it will blow your mind! Instead of mounting the engine at the front, as he is supposed to, he placed it in the back, and it looks absolutely stunning!

When he was asked why he would do that, he answered that it was due to the traction hence the car would have more weight in the back. This Honda Civic is definitely going to be unlike any other you have seen. The engine is actually a B18 C1 with a GT 35 turbo. This awesome combination allows this rear engine turbo Honda Civic to be super fast. It was 25 psi of boost.

The engine swap enabled him to produce as much as 560 HP, pretty amazing for a Honda Civic. The most impressive thing is the appearance of the engine mounting which is made from steel and Plexiglas. What do you think, is this the best engine swap that was ever made?