A little bit of teasing for the new and upcoming 2015 Saleen 302 Mustang with the Saleen`s latest interpretation. With uts aggressive new looks and a bit of a ruff design, its appearance is quit different from the run – of – the -- mill 2015 Ford Mustang GT. Behind the looks of this new Saleen 302 Mustang is the company`s Design Director Sean Smith.

Maybe it is only that we are still not use to the new looks, but however the things may be, in this article we will emphasize the major attributes so that we can make a far comparison.

Check out the photo! 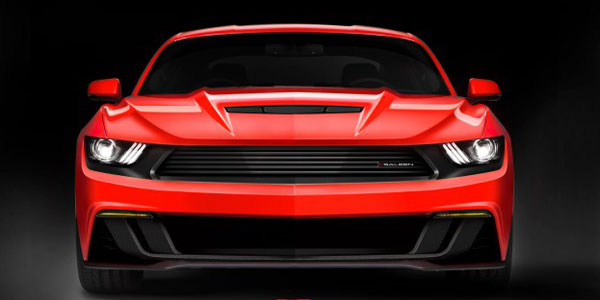 From the things that we were able to find out for a fact is that the 2015 Saleen 302 Mustang will have a new, sportier front fascia that will contribute to a wider and nastier look of the new car. This is also going to place the Saleen in the same lineup with all of the other pony cars on the market with the usage of a full -- width grille with no colored bits between the headlights to interrupt its overall appearance. It obvious that it was under the influence of the 1969 Boss 302, which totally cool if you ask me.

In this case, we have got to remember that the 2015 Ford Mustang`s face was a subject of big controversy because of the fact that the front end wears the same design with the current Ford Fusion model. Because of this similitude, some long time Mustang fans actually disliked the new front. Perhaps this was one of the main reasons why Saleen people have turned to a new design of the front fascia that is very different then the well known 2015 Mustang face. On the other hand, some critics are throwing a poisons arrows saying that this new looks was actually taken from the current Chevrolet Camaro. And if we take a closer look at the grille section that runs from headlight to headlight with the blacked out grille detail, a certain similarities can be most definitely seen, but yet, we would not go that far to say that it was actually borrowed from the GM`s muscle car.

Instead of that, from the looks at the overall workmanship, we can conclude that the new package by Saleen will have a wider hood, shallow scoop that is appropriate with the lines and increased factory made hood of Ford Mustang. Suspension is also lowered and track focused. We still do not have an official confirmation, but if we look back at the history of Saleen, we are expecting about 450 horsepower. Therefore we do not hide that we have big expectation from this 2015 Saleen 302 Mustang, especially after Ford`s claim that the new 2015 Mustang GT`s 5.0 l will be hell of a lot better than the already impressive 5.0 l. thus leads to a high hopes and of course, an introduction of a supercharged versions in short time.