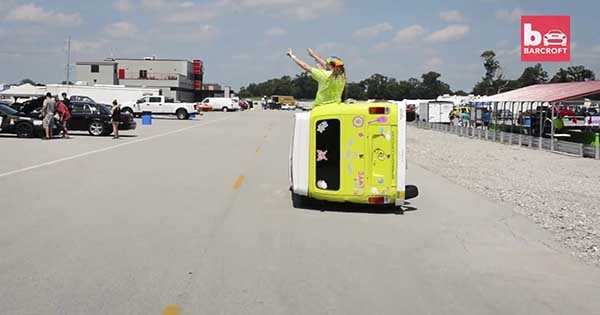 This name definitely suits this VW camper van because it`s exactly that – trippy. A bunch of mechanics managed to do something never done before. Make a vehicle drive sideways! The VW Camper van is most definitely the best choice for such a move. It`s iconic, cool-looking and an ultimate classic. The guy who built this eccentric vehicle is called Jeff and he built it with the help of Gang of Outlaws. They managed to build it in around 1000 hours. They were working on it 5 weeks so it could be fully ready for the van`s racing debut. They managed to complete 224 laps. Those laps were completed on a track that 2 miles long.

This 1976 VW Camper that has the ability to drive sideways is powered by a 1.8L GTI engine and produces around 120 HP! It can reach 100 miles an hour and it can reach 60mph in 8 seconds flat. However, all of you must be wondering how did they manage to make it drive sideways? Well, this trippy van is actually made out of two vehicles. So, we said that it`s a 76` VW Camper. However, this camper van is actually placed on top of an 88` VW Rabbit. It has two bumpers that both of the actually have welded mounts. However, that`s not all as it has different mounted points around the body. There are also various mounted points around the chassis.

At last, check out this amazing custom VW camper!